Gigi Hadid has no problem standing up for her boyfriend, and she proved it in spectacular fashion early Sunday AM when she launched on Jake Paul.

Jake was at the Fury/Wilder fight Saturday night in Vegas and apparently ran into Zayn Malik. Apparently, Jake felt dissed because afterwards, he tweeted, “almost had to clap up zane from 1 direction because he is a little guy and has an attitude and basically told me to fuck off for no reason when I was being nice to him…. zane ik you’re reading this… stop being angry cause u came home alone to ur big ass hotel room hahaha.”

And, Jake wasn’t done … “bro he literally started yelling and freaking the f#ck out  “you wanna test me mate. lol I feel bad for childhood stars.”

Gigi was more than ready to jump in …  “Lol cause he doesn’t care to hang w you and your embarrassing crew of YouTube groupies ..? Home alone with his best friends like a respectful king cause he has me, sweetie. Unbothered by your irrelevant ugly a$$. Go to bed.” 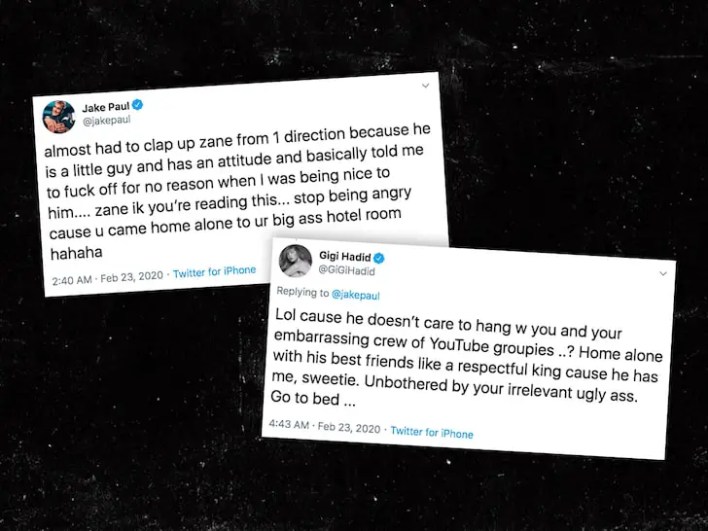 Granted … not as good as the Fury fight, but pretty damn close.

In More News – B. Smith dies after suffering from Alzheimer’s Disease

Dan Gasby announced her death, saying, “It is with great sadness that my daughter Dana and I announce the passing of my wife, Barbara Elaine Smith.” He says she passed peacefully at 10:50 PM Saturday at their home on Long Island after having battled Alzheimer’s Disease for several years.

B. started her career in the 1960s as a model who was signed to Wilhelmina modelling agency. In 1976, she became the first black woman featured on a cover of Mademoiselle.

She went on to open 3 of her popular B. Smith restaurants in New York City, on Long Island and also in Washington, D.C. Continue Reading